Samsung Galaxy Y, also known as GT-S5360 is an Android-based smartphone offered by Samsung. There are pretty big chances to know about the existence of this device, but we have a fresh news about it:Samsung Galaxy Y is now available via Three UK having a price of $128 on Pay As You Go. 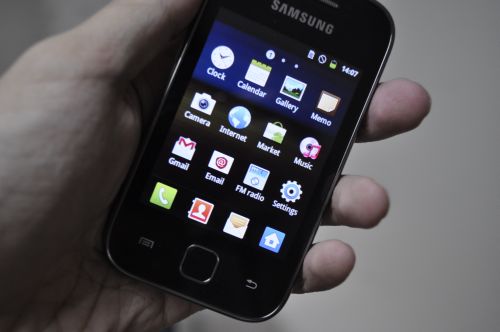 Samsung Galaxy Y a 3.0-inch 320 x 240 capacitive touchscreen display and it is powered by an 830MHz processor which runs on Android 2.3 OS. Maybe those aren’t exactly the news that you were looking for, but at the price mentioned above you can’t actually get something better. The connectivity options included by Samsung Galaxy Y are the following ones: Wi-Fi, Bluetooth 3.0, Micro-USB, 3G, a 3.5 mm audio jack.

And it supports up to 32 GB of storage thanks to its Micro-SD Card slot if you want more than its 180 MB of internal memory. The 2 MP camera having a resolution of 1600×1200 pixel and equipped with Geo-tagging is dissapointing too, but the good news is that it Samsung Galaxy Y is available in various colors: fruity orange, metallic gray, white /back covers in pearly white, dark black, bubblegum pink and silver platter.