Acer Liquid Glow was officially announced a few days ago as an entry-level device. But it has some surprises for us too. Let’s take the example of its NFC connectivity or the fact that it runs on Android 4.0 Ice Cream Sandwich. And that’s much more, so it deserves all our attention. 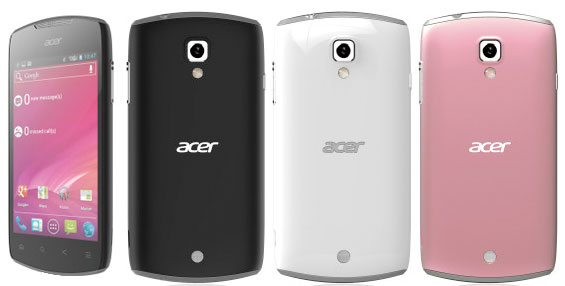 From what we know at this point, Acer Liquid Glow sports a 3.7-inch display having a maximum resolution of 800 x 400 pixels and it packs a 1 GHz single-core processor, but we’ll come back with ore details concerning this aspect. We can also tell you that it is equipped with a 5 megapixel rear-facing camera with LED flash, so we can hope for the best in terms of photos and videos.

As for the memory aspect, Acer Liquid Glow includes 512MB of RAM and 1 GB of storage, but don’t forget to take into consideration the possibility of using its micro SD slot, so the problem can be easily solved. And even more, it’s going to be available in multiple colors such as Alpine White, Sakura Pink or Cat’s-Eye Black, so we can guess that its main target are the teenagers. But we’ll that for sure in early summer when it’s going to become available.