LG Optimus L5 is a 4 inch smartphone from the LG’s L-Series that was recently announced at MWC 2012 in Barcelona. We can tell you from the start that it doesn’t include anything that you haven’t seen before. But although it isn’t here to impress you, LG Optimus L5 has a few chances to be a good option for a limited budget. 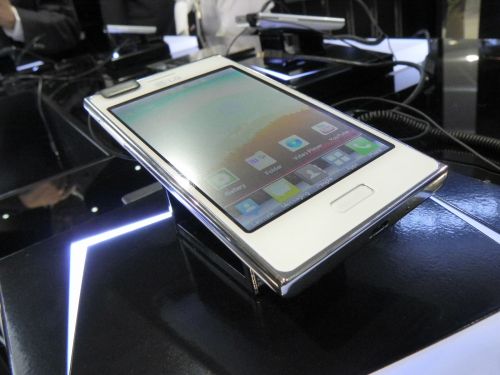 The list with its technical features isn’t yet complete, but we can tell you about its main characteristics. For example, LG Optimus L5 is powered by a 800MHz processor, so we have all the reasons to be disappointed as long as this processor is indeed slow even if we compare it to other mid-range devices. But the best part is that it runs on Ice Cream Sandwich, the long expected version of Google’s Android operating system.

And the 4-inch HVGA display with a resolution of 320×480 pixels is decent enough, but of course we can’t even think about the super –AMOLED feature. LG Optimus L5 is also equipped with a 5MP camera camera with LED flash, Auto-focus and various effect options, so taking high quality photos won’t be a problem at all.