Samsung Galaxy lineup has now a new model – Samsung Galaxy Xcover, a rugged Android device which comes with IP67 standard certification. We must tell you from the start that it offers complete resistance to dust, shock and water for up to 30 minutes and its specifications are acceptable – not something that we haven’t seen before. 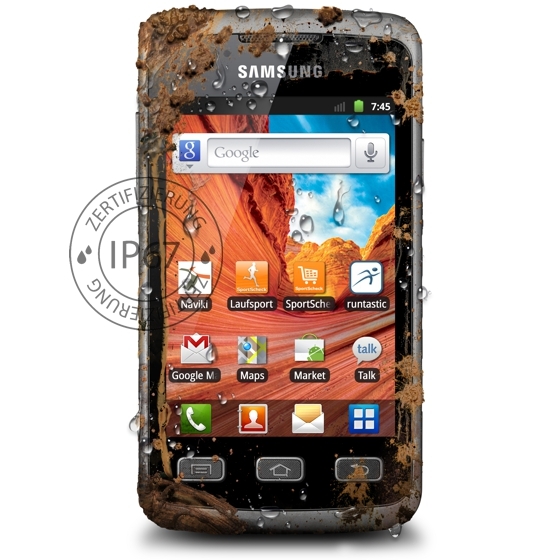 Let’s talk about its capacitive multi touch screen having a 3.65 inches diagonal, as well as a displaying capability of no less than 16 777 216 colors; but there aren’t any details about the resolution. What we know for sure is that it will include some other elements such us the usual Proximity sensor, Ambient light sensor, Accelerometer sensor for UI auto-rotate, Samsung TouchWiz UI and SWYPE Integration. We can also tell you the fact that it comes equipped with a 3.2 megapixels camera and we know everything about it.

We are referring at its features among we can mention: auto focus, LED flash and a maximum resolution of no less than 3264 x 2448 pixels for its pictures. We must also mention the video recording capability, but you must forget all about a secondary camera for video calling. As for the connectivity, it includes a Bluetooth module version v2.1 with EDR Stereo, Wi-Fi, A-GPS, HSDPA – up to 7.2 Mbps (3G), HSUPA – up to 5.76 Mbps (3G), Stereo FM with RDS, v2.0 mini USB and 3.5 mm stereo headphones jack.

When it comes to the software aspect, Samsung Galaxy Xcover runs on Google Android 2.3 Gingerbread operating system, but we have no CPU or RAM details, not to mention the lack of information about the autonomy, dimensions and weight. And if you are curious about the market status, we can tell you that it isn’t released yet, but it will arrive in Germany in October. There’s no word about a U.S. release or price, but we’ll keep you updated.