Motorola announced its MOTOKEY XT EX118 on July 2011. We know that seeing this physical QWERTY keyboard, you are probably tempted to think about a BlackBerry phone model, but we must tell you that you’re wrong. That’s not the case; but we can assure you that you can also find some features that can make this smartphone interesting enough to be taken in consideration, probably at a much lower price. 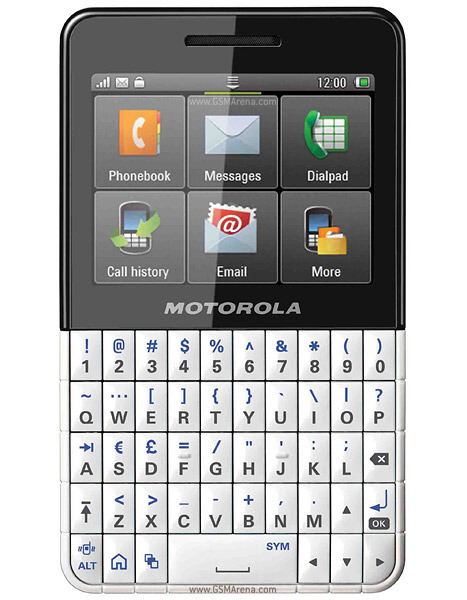 The handset has both QWERTY keyboard that we’ve already mentioned and 2.4 inches TFT capacitive touchscreen having a displaying capability of 256 K colors and a maximum resolution of 320 x 240 pixels. But we can’t tell you anything about its operating system or about the processor; as for its Li-Ion standard battery thing don’t look so great as long as it gives a talk time of 4.10 hours and only 200 hours of stand-by time.

The 3.15 megapixels camera is not probably what we are looking for. Its pictures can reach a maximum resolution of no less than 2048 x 1536 pixels, it also has a video recording capability, but you must forget all about a front facing camera for video calls as long as it wasn’t installed. It supports 2G (GSM 850 / 900 / 1800 / 1900) network and let’s talk about its connectivity elements too, like the Bluetooth v2.1 module with A2DP, v2.0 micro USB, a 3.5 mm stereo headset jack, or Stereo FM radio.

If you are curious about the creative features, we can tell you that there are plenty of them such as Games, Supports Java Apps, SMS, MMS, Email, IM, HTML Web Browser, Organizer, Predictive text input, or Voice memo. And good news come when we are referring to the portability aspect too because this Motorola Motokey XT EX118 weighs no more than 99 grams, having the dimensions of 103 x 60 x 9.9 mm, so it fits just perfectly into your pocket.