We hear rumors about Acer Iconia Tab A100 everyday. While some of them present it as a device that is almost prepared to hit the stores, others tell the story of an abandoned project. Let’s hope that’s not the case and we’ll have the chance to enjoy all the promised high-end features. 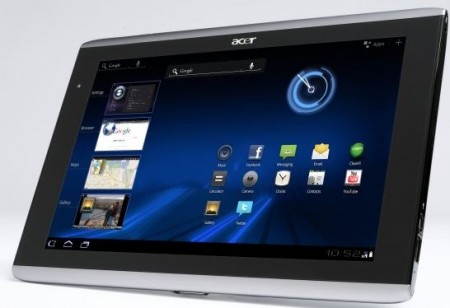 Because we are talking about a tablet that could include a NVIDIA Tegra 2 dual core processor at 1 GHz frequency, as well as a NVIDIA GeForce GPU or an LCD capacitive multi touch screen which measures 7 inches and has some great abilities: a maximum resolution of 1024 x 600 pixels and the possibility to display no less than 16 million colors. Another positive aspect is that it offers various types of connectivity options among we can mention: Bluetooth, 3G, or Wi-Fi, as well as a MicroUSB port or a HDMI port.

This tablet includes not only a 2 megapixel camera (1600 x 1200 pixels resolution) for video chatting, but also a 5 megapixel rear-facing camera offering pictures that can reach a maximum resolution of no less than 2592 x 1944 pixels. And it also has some pretty interesting features such as Auto Focus, or LED flash in order to let you remember al the special moments in your life. We must also mention that this tablet will run on Google Android 3.0 Honeycomb operating system and it will also include an 8 GB micro SD card, not to mention the possibility to extend the memory up to even 32 GB – as you can see, nothing to complain about.

We know that you are probably very curious about the autonomy provided by this device, but unfortunately we don’t have this detail at this moment. We can tell you though some other interesting things about Acer Iconia Tab A100 – for example its dimensions, as long as it measures no more than 195 x 117 x 13.1 mm, with a balanced weight of exactly 470 grams; or its estimated price of 349 $ which might be more than helpful in your final decision.