Are you looking for a tablet much cheaper than the G-Slate (T-Mobile), Xoom model (Verizon or WIFI) and the iPad2? But one that won’t disappoint you when it comes to the performance aspect, including in the same time some very interesting features. And if you use a lot of Google services such as Docs, Calendar, GMail, Reader, you certainly need an Android tablet which works much better on this aspect than a iOS one. 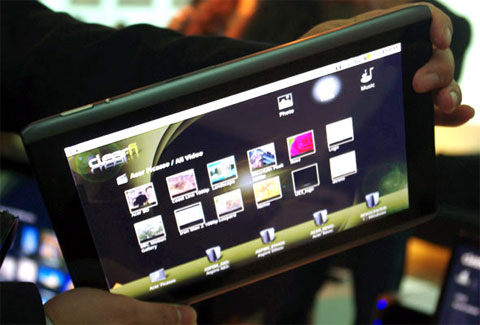 So we can recommend you the Acer Iconia Tab A500 model which is equipped with an NVIDIA Tegra 2 dual core processor powered at 1 GHz frequency, as well as a 10 inches LCD capacitive touchscreen having a maximum resolution of 1024 x 1280 pixels and the ability to display no less than 16 million colors. As all the other high quality devices, it includes accelerometer sensor for UI auto rotate, proximity sensor for auto turn on or off, gyro sensor and light sensor too.

As connectivity options this tablet offers 3G, Wi-Fi, Bluetooth and let’s not forget that you can connect it with external devices such as HDTV, monitor, thanks to its microUSB and HDMI port. It also supports 1080p HD video and its 3260 mAh t Li-po standard battery provides up to 8 hours of video playback time. But one of the main advantages remains the 5 megapixels camera including LED flash, or auto focus and the ability to take pictures at a maximum resolution of no less than 2592 x 1944 pixels. And there is a second megapixels front facing camera for video chatting, having a resolution of exactly 1600 x 1200 pixels.

As we already mentioned, it runs on Google Android 3.0 Honeycomb operating system and we also have to tell you about the total amount of 1 GB RAM memory. If this isn’t enough for you, remember the fact that in the package there is also a 16 GB micro SD card and it remains the possibility to extend the memory up to 32 GB. Although this tablet is really thick, measuring only 260 x 117 x 13.3 mm, the problem comes when we are talking about its weight of no less than 730 grams, making it one of the most heaviest consumer tablets available on the market. But it remains a very good looking tablet, having a price of no more than 449.99 $.