Acer W4 is a result of the partnership between Acer and Microsoft. This candybar smartphone is still a mistery, but informations start to appear and we really think that you’ll like what Acer has to offer. We don’t have any details about the portability, battery or the price and release date, but there are a few technical specs which disserve to be presented. 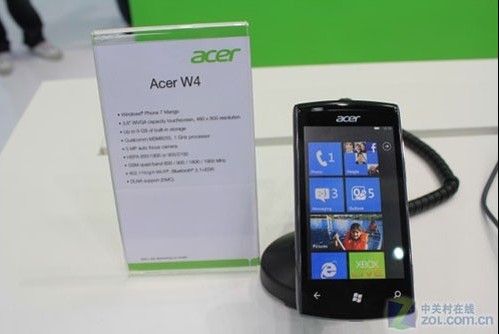 We can start by mentioning the same processor as in the Xperia Play, Qualcomm MSM 8255 running at 1GHz or the 3.6-inch WVGA Capacitive screen having a maximum resolution of no less than 480 x 800 pixels. The most recent version of the Microsoft’s Windows Phone 7 operating system – Windows Phone 7 Mango is their option for this smartphone and we couldn’t agree more. Acer W4 is equipped with a 5 megapixels sensor which can take pictures having a maximum resolution of 2592 x 1944 pixels.

Let’s not forget about its Auto focus or Digital zoom abilities, as well as the video recording capability, which is made at 720p HD resolution. Although there isn’t a secondary camera for video calls as we are already used to, Acer W4 offers us another positive aspects to talk about. If you are one of those people who use their smartphone especially as a communications device, the 8GB minimum memory option might be good enough even without a micro SD card for memory expansion that we don’t know anything at this moment.

Connectivity features aren’t forgotten – Wi-Fi 802.11 b/g/n, Bluetooth v2.1 module with EDR Stereo, a v2.0 micro USB, not to mention A-GPS, GPRS, EDGE, HSPA, a 3.5 mm stereo headset jack and FM radio with RDS. When it comes to the Multimedia section, we must tell you that it includes Video Playback or Music Player with features such as Album art cover and Preset equalizer. And what is left for us to say? We see in Acer W4 a reasonable quality, so we expect a competitive price too, as long as it seems to be more like a budget device.