Acer recently announced its long expected tablet, the Iconia-6120 Dual-Screen Touchbook at the Mobile World Congress. Now it’s sure we are not mistaken – we’ll soon have the first tablet to offer two touch-enabled 14-inch widescreen LED backlit LCDs. So let’s see some of the included features in order to understand why this model is a winner of this year’s “Last Gadget Standing” award at CES. 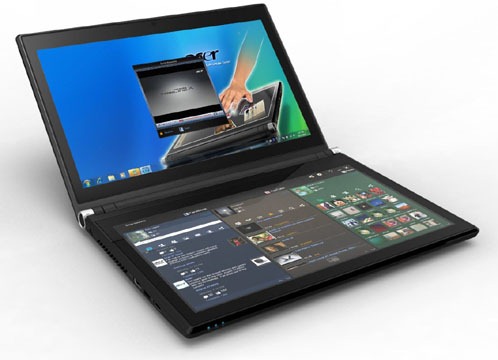 The device will runn on Windows 7 and will include a Intel Core i5 processor, 640GB hard drive and 4GB of RAM. Its 1.3 megapixel HD webcam is perfect for face-to-face videoconferencing and the Clear.fi feature allows you to connect all Acer devices on a network and organizes media files by type – photo, music, video or pre-recorded TV.

In its list of features are also mentioned USB 3.0, HDMI, WiFi, as well as full accessibility to your favourite social networking sites such as Facebook, Twitter or YouTube. And the materials used manage to stand out too: we are talking about ultra-thin Gorilla Glass from Corning, offering the highest resistance. So there is no surprise that Iconia-6120 Dual-Screen Touchbook won such a great popularity.

In United States and Canada it will be available starting this April for a price of 1199 $; in Europe instead it will cost you 1200 euro plus taxes.